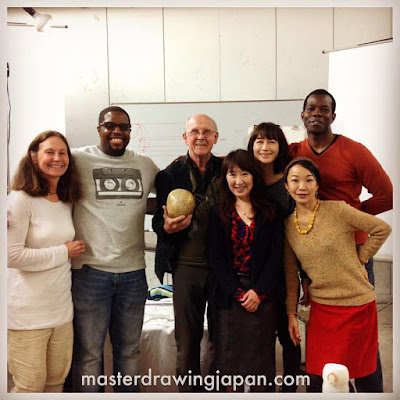 A second home-run thanks to master draftsman, painter and illustrator  Glenn Vilppu and the Suidobata Fine Arts Academy.    A four-day intensive drawing seminar in Tokyo on figure drawing, and drawing the human head, Glenn Vilppu, gave an amazing class to students, professionals and teachers from both Japan and abroad.  Some students came as far as from Kyoto in order to attend. 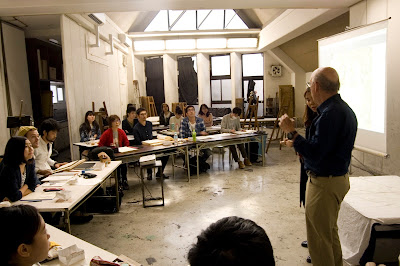 This was Glenn Vilppu's second collaboration with Master Drawing Japan but his first (of hopefully many ) at the Suidobata Fine Arts Academy in Tokyo. 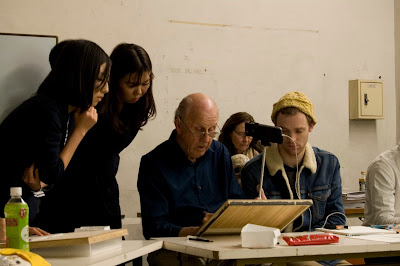 Glenn Vilppu, who has taught drawing in the  animation industry for over 20 years (notably the Disney Animation Studio) made this note about the tools and terminologies that are used in animation which were carried over from classical painters and illustrators.  Essentially the aim the the same:  to create a sense that something is believable and living before an audience. 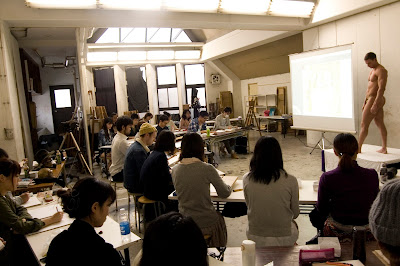 As noted in an earlier blog, there is a new generation of artists coming up in Japan with a very hungry interest in the western approach towards art and animation.   Master Drawing Japan will provide for this need with more seminars with noteworthy professionals in the film and animation industry in the very, very  near future. 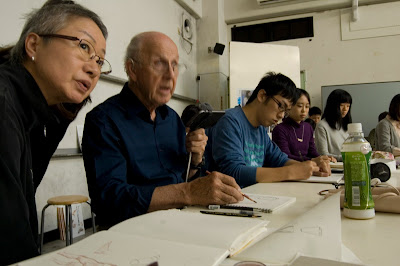 "A figure is not done well unless action appears it in it that expresses a state of mind."
-  Leonardo DiVinci

"If you don't have the gesture and the action, you literally don't have anything."
- Glenn Vilppu


World renown Disney, Dreamworks and UCLA drawing instructor Glenn Vilppu  is returning to Tokyo again for his second drawing masterclass with Master Drawing Japan.  It will be a four day drawing seminar on November 7th, 8th and 14th and 15th.

One of the most coveted drawing instructors in the animation and production art industry, Vilppu has taught the art of figure drawing for over 40 years in workshops around the world teaching principles and techniques professionals in the animation industry such as Disney, Dreamworks and Warner Bros.

Vilppu will help participants master techniques of drawing the human figure in the first session and teach a special class on the human head in the second session..   He will give direct receive instruction and feedback to each participant.

Vilppu's mantra has been to teach "No rules, just tools" to enable artists to use them in any direction he or she wishes.

The event will be held at Suidobata Fine Arts Academy in Ikebukuro.

To learn more about this event please visit: http://www.suidobataabroad.com/glenn-vippuドローイングセミナー/ 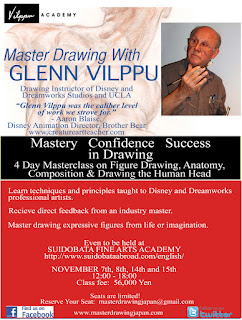 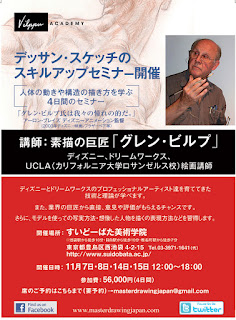 Greg Broadmore's Monster of a Masterclass in Japan 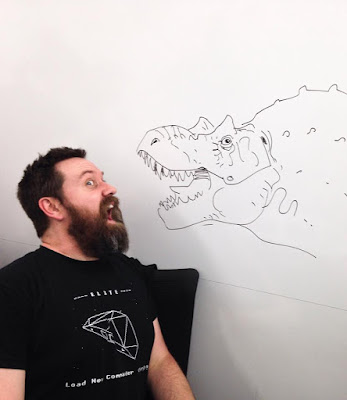 It was really an honor organize our first masterclass with Greg Broadmore from Weta Workshop yesterday at Akiba Hall.  180 artists, students and professional came in attendance. 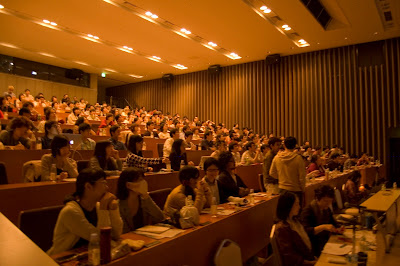 Greg for four hours discussed about his work journey in concept art which led him to Weta Workshop, the amazing projects he has worked on - some of which has never been seen by the public before----- and what he has planned for the future with Magic Leap.  An additional bonus, Greg  created an on-the-spot digital painting of an outer world monster for the audience. 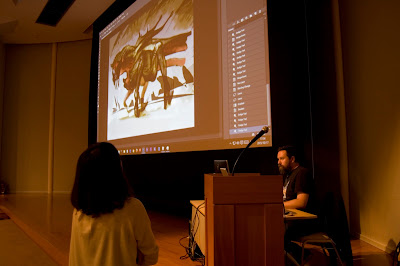 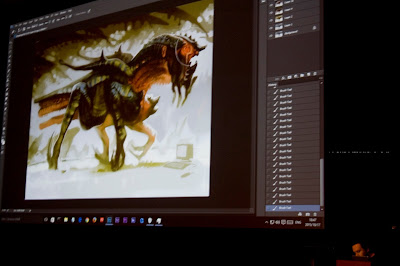 It was an amazing and informative show and most of all it was fun. 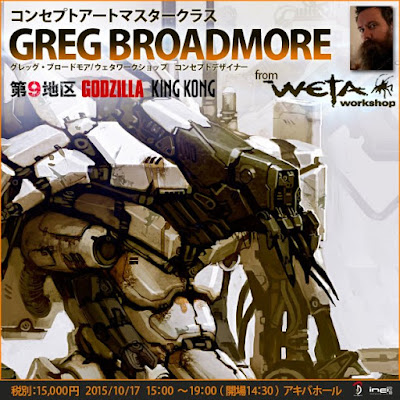 How do these movie titles make you feel?  King Kong (2005), Godzilla (2014), The Chronicles of Narnia, Mad Max: Fury Road, The Adventures of Tintin and the Academy Award nominated for Best Picture film, District 9.

If you are at all familiar with the outstanding visual effects of these films, you might know that they were all designed under Peter Jackson's award winning special effects company:  Weta Workshop.

You should also know that all these films were all designed in part or directly under the creative direction of Greg Broadmore.

Sunday, October 17th, 2015, for ONE (1) day only next month, Greg Broadmore will be coming to Tokyo, Japan to conduct a concept design masterclass at Akiba Hall.

At the event Greg Broadmore will discuss working as a concept designer on major blockbuster films,  his experience with Weta Workshop and do a live demonstration of for all the attendees.

The event is being produced by Japan's Born Digital, Inc., INEI Studio and Master Drawing Japan.

First the 2020 Tokyo Olympics and now THIS!  What news to wake up to!!   It's official, the Snoopy Museum Tokyo will open in Tokyo's Roppongi district in March of 2016! 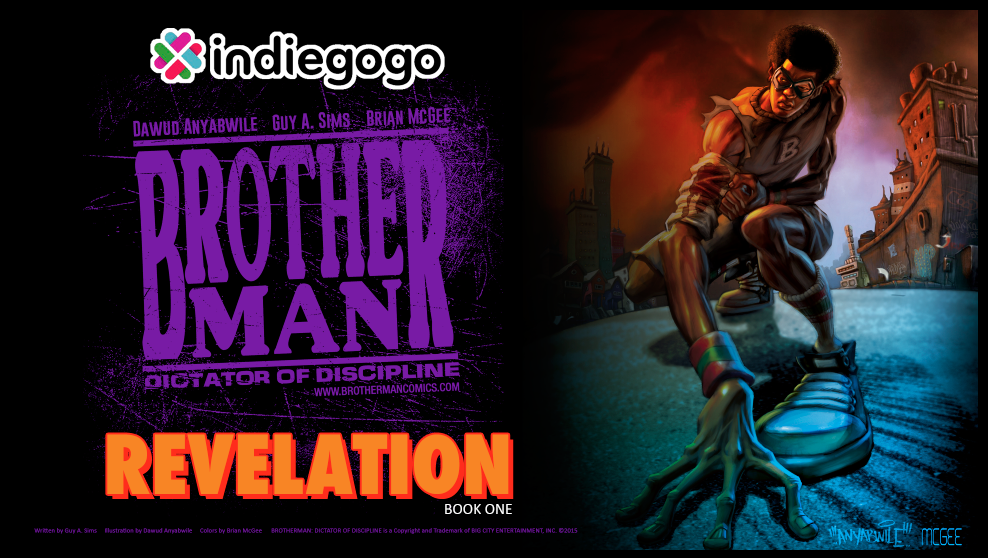 In spring of 1990, at my Alma mata, Howard University, (the African-American university mecca) the talk was everywhere...

"Yo, did you hear?  Did you hear??  There is a new black comic book coming out made and drawn by black artists!"

Bear in  mind despite being around the same time as the first Tim Burton Batman film,  comic books had not quite caught on as a viable mainstream commercial entertainment -- much less, successful independent comic publishing (ie. Image Comics) was still just on the horizon.

The interest and curiosity was real and electric and not just around the university but also around the nation.  Even Arsenio Hall (late night king for American TV at the time) even gave Brotherman a plug.


The only problem was HOW to get it. Finding a copy of Brotherman was extremely difficult in comparison the monster distribution that companies like Marvel had at the time. 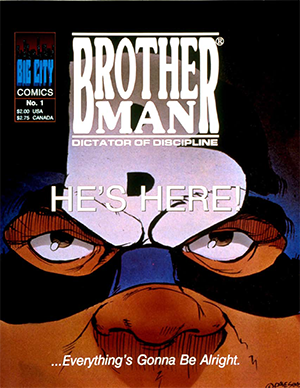 The brainchild of artist Dawud Anyabwile and writer Guy A. Sims. Brotherman's release was a landmark creative work both for the comic book industry but also, American culture.  Brotherman chronicled "hard-boiled-hip-hop" urban adventures of  vigilante Antonio Valor in his war against urban crime .  Brotherman  was an "ethnic" comic book right down to the animated, almost graffiti style rendering and and choice of line --- but still accessible to a wide audience.  Not a superhero just painted black.

Finally, Brotherman is on the fast track to being reborn in an animated graphic novel and series though an IndieGogo crowd funding project.   A new retelling of the Brotherman saga from the talented Guy A. Sims, Dawud Anyabwile and colorist Brian McGee is what many have been waiting for a long time.

The original comic magazine series was a compelling story with amazing artwork that had more to express culturally and personally than anything on the market at that time.