From Up On Poppy Hill (コクリコ坂から) : Why animate? 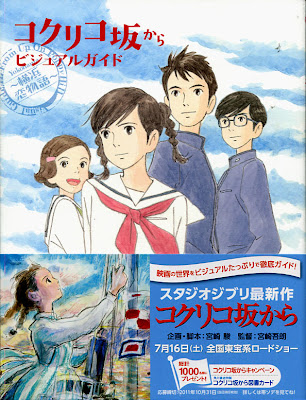 Since Studio Ghibli's "From Up On Poppy Hill" will be released in a few days,  I thought it would be good to finally get around to soapboxing my impression of the film.

"From Up on Poppy Hill" (known as Kokuriko Zaka Kara here in Japan)  is an absolutely brilliant film.    It was directed by Hayao Miyazaki's son, Goro and based on a 1980's manga series.   Without giving too much away, it tells a nostalgic (well, nostalgic for Japanese people anyway) story about a group of ambitious high school students in the rapidly developing Showa Period of Japan,  post-World War II.

This 1960's period in Japan had a resurgence of development industry-wise as well as an accelerating "We Can Do It" spirit amongst Japan's youth. These kids would be the ones who eventually would be the leaders of Japan's economic boom period.

This was one of the better animated films I have seen in a long time.  Not so much for technical reasons but for it's ability to tell a very moving and compelling story.  Which brings me to my dilemma about the film:  "Why Animate It?"

Traditionally and even more in the USA, animation has been used as a tool to tell stories that cannot be told with conventional live action.  IE: the use of caricature for exaggeration, as a special effect.    "From Up On Poppy Hill" was beautiful,  but it was completely devoid of any need for exaggerated effect and I'll even go as far to say it borders on lacking a sense of caricature since all of Ghibli's characters literally have the same face --- with the exception of over-the-top characters.

On the heels of news that Disney announced that has no intentions of doing any hand-drawn animated projects in the near future, it made me think also about the importance of a film like this ---

I noted my opinion to a Japanese friend who felt the movie was spot on in terms of the atmosphere it was trying to convey.  As she put it, this time in Japan was a very hopeful, and beautiful time in Japan mainly for its simplicity.  If the film was done up to the teeth with fancy zooming shots and, near- photorealistic backgrounds -- it simply would have killed the charm of that time for Japanese --- and the movie.

Some say we don't go to animated films to see the technical merits of the animation since story always is what people ultimately remember.  But in a sense we do go for the atmosphere that animation brings to a story.  As the saying goes, less can be tremendously more.

Currently it seems many animation studios don't appear to believe in this.  Nice to know not all  haven't.