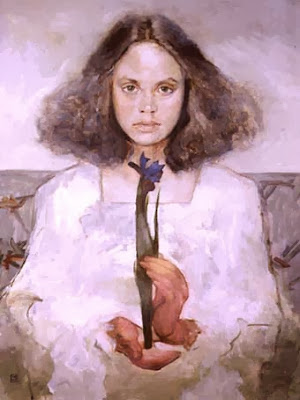 Frank Frazetta called her "The world's greatest living painter." I just learned this great heavyweight of art and illustration passed away recently. After losing Frazetta last year, it's another sad blow to the world of illustration.

My favorite quote from her on digital painting: "...this piece was done entirely in Photoshop - I said "never" and now I say "never again." Where's the painting? It doesn't exist! I can't carry it around in the backyard thumping it."

To be sure, those tangible masterpieces actually touched and created by her hands will be regarded even more precious. 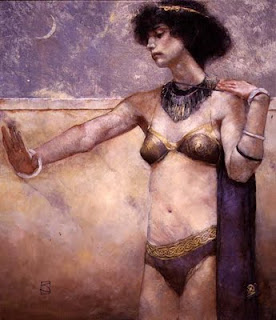 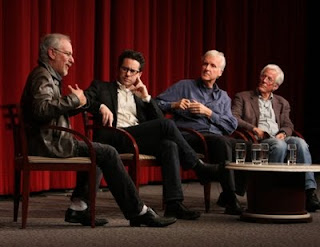 Found a trinity geek fest with a DGA salute to Steven Spielberg. Steven Spielberg, James Cameron and J.J. Abrams all on one stage.
The Golden Boy, the Maverick and I guess the would be Newcomer.
Spielberg sometimes seems cagey when discussing his craft, and to my knowledge has never done a "DVD audio commentary" for any his films.
Because of this, I think he's one of the few who still value the power (and importance) of magic and illusion in filmmaking. (And said it himself that his participation in the Q&A was killing the illusion of moviemaking)
He says there should be no such thing as "trade secrets" and that everyone in the industry should share whatever great discoveries that they have found. I personally agree, but I feel that Steven was perhaps referring to technical process not artistic. Just my opinion.
Should artist feel a need to "explain" themselves? Perhaps not. But when it's in the interest of teaching, encouraging others and raising the bar of the medium for everyone, it's certainly good.
Not as super-insightful as I would like it to have been, but it's definitely a treat. Enjoy.
Posted by Ki Innis at 12:51 AM No comments: 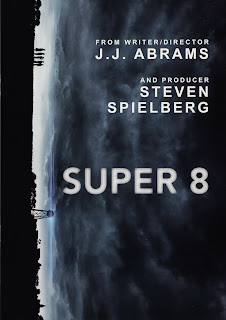 Super 8 was some of the most planned, manipulative uses of nostalgia I've seen in a long time and I loved it. My usual routine to after seeing a movie in Tokyo is to buy a movie program. No, when I say movie program, I don't mean Final Cut Pro or iMovie.
Doesn't anyone remember movie programs?! Super 8 had tons of flaws but it worked as a piece of narrative nostalgia. Just had to get a program. Why didn't the folks in marketing drop the other shoe and release movie programs to accompany the film? (If I'm wrong, please correct me)
Anyone who connected with the nostalgia in this movie, anyone who saw at least ONE 80's Spielberg or Star Wars film in a theater in their lifetime certainly remembers the the pleasure of having "piece of the movie" to take home as a memento or at least certainly a conversation piece.
Folks like to throw that term "viral marketing" around. Which basically is virtual technobabble to say "word of mouth". What better viral marketing than your movie program floating around, sitting on the coffee table when friends come over?
Rather than shelling out an extra 5 bucks on a pair of 3D glasses I'm going to bitch about anyway, I'd much rather spend that on a memento of a great movie experience I'll have forever. The joy of having a movie programs was like a symbol of you were in for a treat or at least you came home with with something because you attended something special.
Any Gen X'er remembers in elementary school the envy of someone having an"Empire Strikes Back" movie program and you just couldn't wait to get to the theaters (not just to see the movie) but to get your hands on one of those programs.
Movie programs are always available with the films in Japan. Any they are just as good (if not better) than the ones that were produced in the USA. The movie programs just don't give the usual publicity shots and storyline overviews, but they also have extensive material showing the pride in the craftsmanship in the making of the film. NOTE keywords: Pride, craftsmanship. If the producers felt they did a good job they should be proud to show people in print what they have labored on.
Given, much of what is covered in movie programs can be seen in the supplementary chapters on the DVD release----but who wants to wait for that?!
Go home with a movie program, in a way the studio is communicating:
"Yeah, you damn, right this is something special you're looking at here. So special we're publishing it so you can hold it in your hands, read it and take it home with you...show your friends."
I can only post a few pages of the Super 8 movie program because the booklet just has too many pages. Definitely you get your money's worth. (26 pages in total)
So what's the deal? Americans don't read anymore? Super 8 was a nice trip back to the feeling of when the experience of movies were... yes dammit, magical experiences. Going home with a movie program certainly added to the experience. 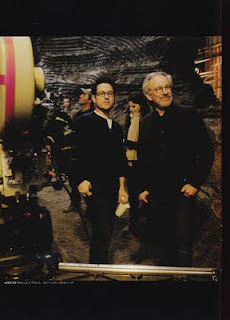 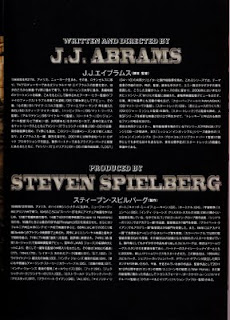 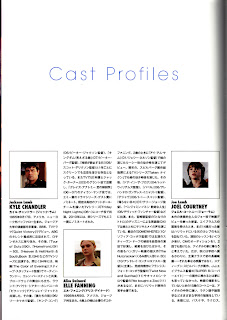 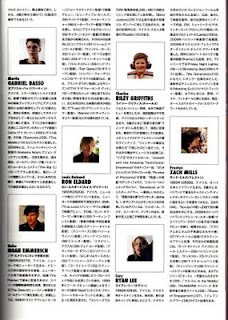 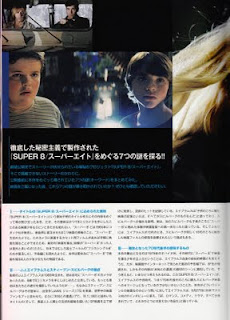 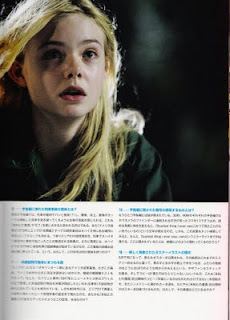 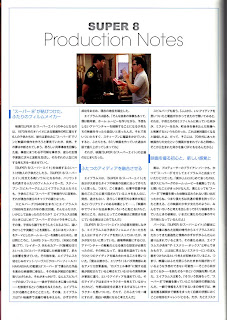 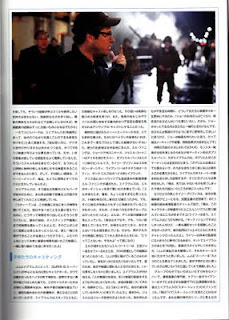 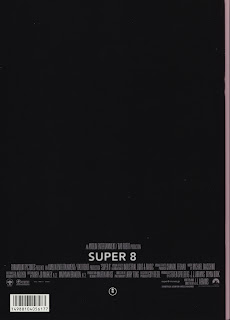 The Future Not So Long Ago 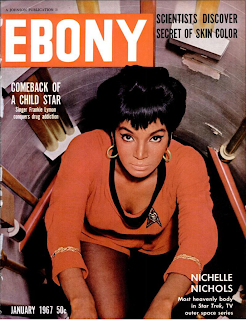 July 2, 1964, the Civil Rights Act of 1964 was signed by President Lyndon B. Johnson. Legislation which outlawed blatant discrimination against African-Americans and other minorities, including women.
Two years later, September 1966, Star Trek aired on NBC, with a clear agenda to show racial diversity and tolerance was the future. The show featured a relative mosaic of ethnic characters ranging from European, African, Asian and mixed heritage, prime-time on a major television network.
This was considered somewhat "pushing the envelope" amongst television producers who in the mid-1960's were still apprehensive if Mr. and Mrs. Mainstream America (non-ethnic America) was ready to have "colored-faces" regularly appearing in their living rooms. Star Trek's writers frequently touched on themes that even today are still considered "touchy". Emotional conflicts of being a mixed or bi-racial child and even allegories of the deep rooted racism between white and black Americans (Star Trek: Let That Be Your Last Battlefield, Jan. 1969).
The look of the original Star Trek may look dated or at best, vintage fashion (still dig the super-miniskirts, bring that back, man) but the shifting of a new mindset towards racial diversity and equality was not that long ago.
This 4th of July weekend, despite being in Tokyo, it's good to reflect that when I return home, rights such as the Civil Rights Act of 1964 safeguard diversity in daily life, and thusly promoting it other walks of life such as media and entertainment. At the risk of sounding didactic (as I usually do) ---- this shouldn't be an issue, but it shouldn't be forgotten or trivialized either.
Found a feature article in Ebony Magazine dated Jan. 1967, with a cover story on actress Nichelle Nichols' role as Lt. Uhura on Star Trek. Fun stuff.
Too bad the idea of pushing the envelope on social issues has been conspicuously absent from Star Trek since the sixties. Funny rather than thinking towards the future, the franchise has been thinking backwards. Just my two cents. 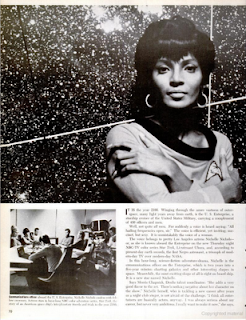 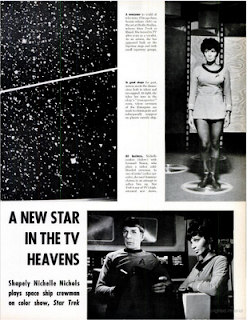 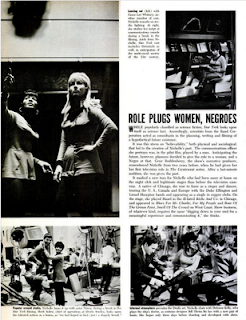 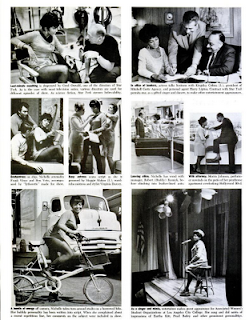