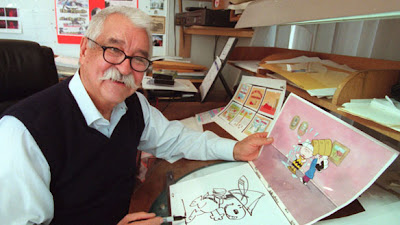 Maybe not a household name, but his work has been a staple of household pastime for over 40 years.
Jose Cuauhtemoc Melendez, otherwise known as "Bill" Melendez (a name "given" to him by folks at the Disney studio) was the first animation director to put together the first prime-time animated special for American television. It all started with " A Charlie Brown Christmas" in 1965 for CBS. The only man Charles M. Schulz would ever personally trust to bring to life Charlie Brown, Snoopy and mini-universe of characters in his comic strip, "Peanuts".
Bill Melendez was the director and producer all the animated Peanuts animated specials, movies and commercial projects while Charles Schulz was alive.

The Archive of American Television on YouTube has an amazing 4-hour interview with Mr. Melendez online. In this interview he talks about his beginnings in animation with Walt Disney's studio, his time at the Warner Bros. Animation Studio, work at UPA and finally establishing his own animation studio.
Art Babbit, Norm Ferguson, Bob Clampett, Chuck Jones, Frank Tashlin, are just some of the names that he goes into detail recalling his early experiences in animation. in this 8 part interview Bill Melendez explains his experience and participation in the Disney Animator's strike of 1941.
Bill Melendez played a part in developing my interest to draw and to communicate through art.
Bill Melendez passed away in 2008. Bill Melendez is responsible for creating the animated visualization of Peanuts. The image that people still have in their minds today. He deserves much more praise for the impact that he had on the television animation industry as well as the role he played in creating priceless childhood and family memories of watching the Peanuts animated specials.
Posted by Ki Innis at 7:18 AM No comments:

William Fraker is not a household name, but he will be remembered by filmmakers as one of the most noteworthy cinematographers of the 1970's and 80's. Nominated for Academy Awards in Best Cinematography in films such as Roman Polanski's Rosemary's Baby, Spielberg's 1941 and Ralph Bakshi's Coonskin (I didn't know that until today!). Perhaps he will be most remembered for one of the most memorable film sequences that "upped the bar" for car chases in cinema: Bullit, starring Steve McQueen.

He should be remembered for being a solid cinematographer who helped his directors visualize the story in the best and most suitable way.

His work doesn't yell and scream "William Fraker, ASC, BSC". However for me, he does define a certain look that was consistent with the cinema in the 1970's. I love that clean look of 70's cinema and those earlier film stocks that were always a little grainy (which gave it life in my opinion) and favored cooler tones.
I think 1970's cinematography and William Fraker comes to mind.
Posted by Ki Innis at 12:24 AM No comments: