In Case You Missed It. 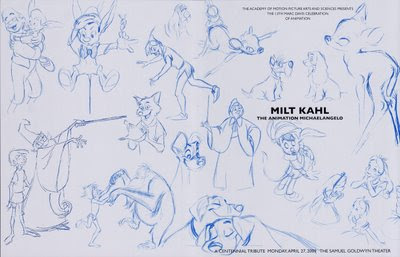 In Spring of 2009 the Academy of Motion Picture Arts and Sciences, along with host (an master animator) Andreas Deja, put on an incredible and perhaps once in a lifetime tribute of to the legendary animator master, Milt Kahl.

I was kicking myself wishing I could have made this event. As I heard, the turnout was so great that tickets were oversold and people had to be turned away.

I just discovered that the Academy in all its grace put up several video clips of the host panel's discussion from the tribute which you can see here: http://www.oscars.org/events-exhibitions/events/2009/kahl.html

Now if they would only post video of the entire tribute online.

Though the clips are only a few minutes in length each, they are a wealth of amusing, sincere and heartfelt anecdotes about one of the most notoriously demanding animators in film history. Andreas Deja, Kathryn Beaumont, Brad Bird, Ron Clements, John Musker, Floyd Norman all shared their priceless experiences with the man.


Infamous for his uncensored and unrestrained candor, Milt Kahl as I have come to understand was demanding due to his passion and high standards. He was "The Disney Style" as I heard it put as his draftsmanship developed the standard and the model for many (if not most) of Disney's animated characters.

People who know who he was regard him as sort of an animation demi-god...which in away he was. His animation talent still exceeds most of the animation we see today.

Despite that, he had a sense of humility about his incredible talent.

To paraphrase, Kahl said something like, "I'm better simply because I worked harder at it."

Amen to that. Art has to be tempered with discipline.

For me Kahl's best performance was his last: Madame Medusa of The Rescuers (1977). The fact that a rough maverick like Kahl could create a mid 40-ish, red-haired, prissy and selfish fop of a hellcat who doesn't know she's over the hill yet proves the fact that animators are ultimately not simply cartoonists, but performers. Actors with pencils.