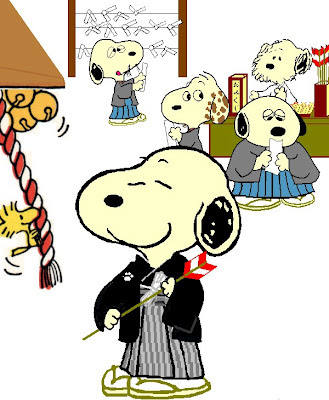 From the people who brought you Ninja Scroll, Japanese animation studio, Madhouse, Inc. has not only acquired animation rights to Charles Schulz's Peanuts, but has already completed one animated short.
Whether this means Madhouse will be animating only content for commercials or if they will be animating narrative content, is unclear at this time. Most likely it will be only for Japan since the American animation studio, Wild Brain has rights for the USA. Wild Brian animated the first Peanuts special with involvement of neither Schulz nor animation director/ producer Bill Melendez with "Happiness is a Warm Blanket Charlie Brown".
Peanuts, otherwise known simply as "Snoopy" (poor 'ol Charlie Brown, upstaged again) is immensely popular in Japan, only rivaled by Mickey Mouse.
Peanuts is now 63 years old. Charles Schulz at one time being the only person to draw the characters, as well as oversee all merchandising, there existed a certain purity in the integrity of the strip. Melendez was the only man Schulz trusted to animate the Charlie Brown and Snoopy universe. Peanuts' charm truly laid in the fact it truly was 2D, graphically. But the nuance and the timing of animated Peanuts is certainly from an American point of view, established originally by Schulz and Melendez.
If Japanese Snoopy stories will be produced, let's only pray it won't be a repeat of the horrid (and I mean horrid) miscarriage of animation like Japan's Lilo and Stitch.